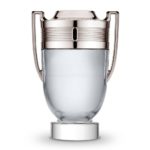 He is the man in all his power, the absolute hero. INVICTUS. Challenged and blessed by the gods. Its perfume is that of victory. A phenomenal shock between stinging freshness and animal sensuality. Two forces to which nothing (or nobody) can resist.

Paco Rabanne Invictus, perfume for men released in 2013, was produced by a team of renowned perfumers: Anne Flipo, Dominique Ropion, Olivier Polge, Véronique Nyberg, all known and recognized in the world of perfumery, serving the best brands. The association of these large nose gives birth to a woody fragrance with marine touches. It opens with fresh notes of mandarin orange, grapefruit and mint. The heart note includes green scents of bay leaves and jasmine. Finally the bottom note expresses a very “wet” side and woody with notes of Guaiac wood, oak moss, patchouli and amber gray to create a fresh and virile fragrance.

The Invictus (“undefeated” in Latin) is enclosed in a bottle representing a cup, symbol of victory. The Invictus perfume is the olfactory signature of a powerful, almost divine man. He is incarnated in the campaign by former Australian rugby player Nick Youngquest, in which he proudly advances in a stadium. He is acclaimed victor and welcomed by the gods who celebrate his strength and omnipotence.

A trophy for our hero. Solid glass cut and metal shiny-triumphant hood.
Shortly after its release, Invictus ranked among the best sales in men’s perfumery and is currently one of the most popular fragrances.

Let us know what you think...

What others are saying